An industrialist's two-timing wife conducts an elaborate plan to have him murdered in this film noir classic. 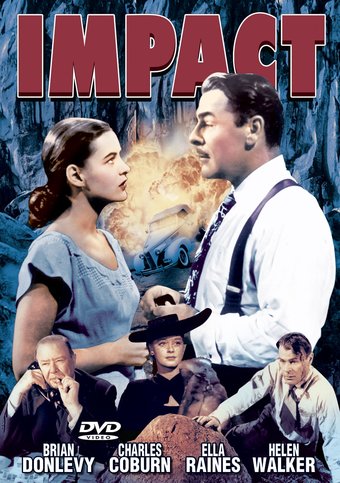 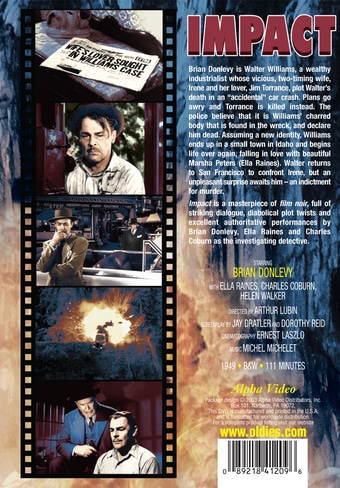 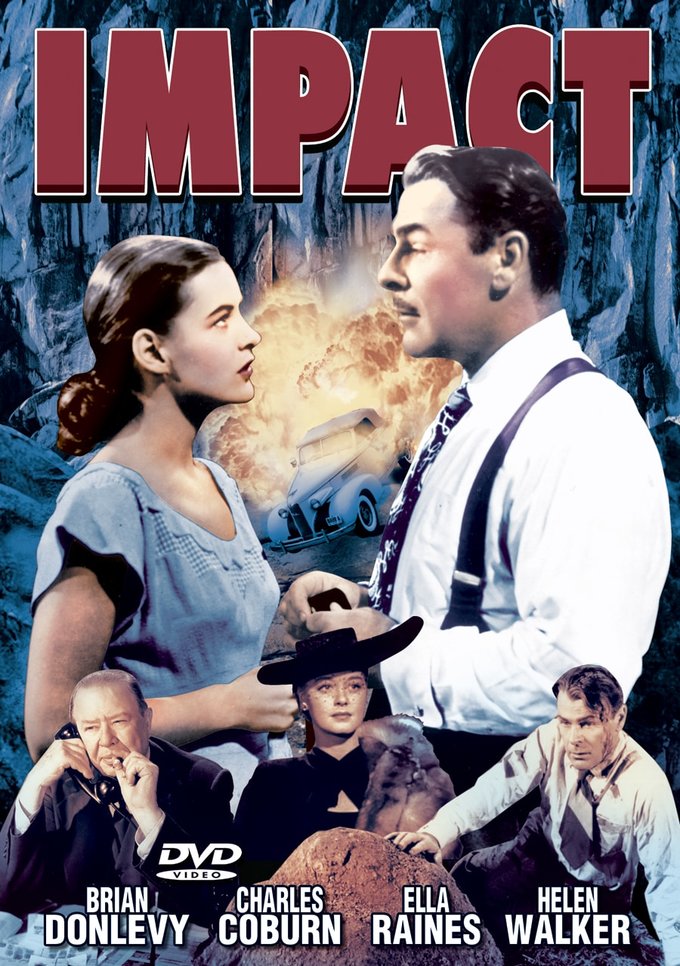 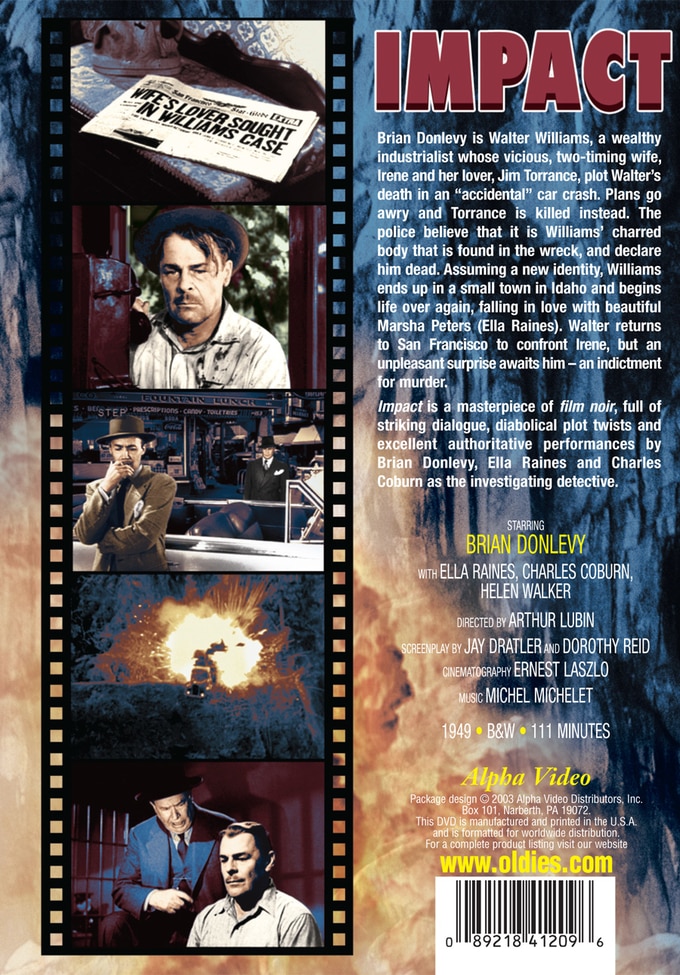 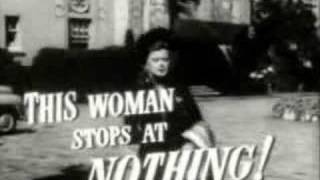 Brian Donlevy is Walter Williams, a wealthy industrialist whose vicious, two-timing wife, Irene and her lover, Jim Torrance, plot Walter's death in an "accidental" car crash. Plans go awry and Torrance is killed instead. The police believe that it is Williams' charred body that is found in the wreck, and declare him dead. Assuming a new identity, Williams ends up in a small town in Idaho and begins life over again, falling in love with beautiful Marsha Peters (Ella Raines). Walter returns to San Francisco to confront Irene, but an unpleasant surprise awaits him - an indictment for murder. Impact is a masterpiece of film noir, full of striking dialogue, diabolical plot twists and excellent authoritative performances by Brian Donlevy, Ella Raines and Charles Coburn as the investigating detective.

Brian Donlevy stars in this hard boiled noir as Walter Williams, a wealthy industrialist who is unfortunately also a cuckold. Desperate to get rid of him, his two-timing young wife, Irene, and her lover plan Walter's death, only to have their scheme go horribly awry. Walter survives, and ends up in Larkspur, Idaho with a nasty case of amnesia that begins to clear when he sees stories about his own death in the newspaper. Having fallen in love with a girl in Idaho, Walter goes back to his wife to confront her, only to be charged with murder himself. Filled with smart, arch dialogue, back stabbing women, and numerous plot twists, IMPACT is a hugely entertaining noir.

Customer Rating:
Based on 4726 ratings.


Charles Coburn was such a great character actor that he steals every scene he's in. Brian Donlevy seems stiff (but he always does) and Ella Rains adds classic beauty. There's plenty of twists and turns in this well made film - enough to keep you wondering what's next. Enjoy it! Highly recommended.


After my third 'screening' of this film, I've decided to amend my intial assessment/criticism and give IMPACT 4.5 Stars.As previously stated,IMPACT is an impressive little opus that contains elements reminiscent of other films, and wastes little time in presenting the "set up": rich guy's wife and her lover plan to do hero in via an "accident". Several clever plot twists and complications will keep you engrossed in the film. But IMPACT is less about betrayal than self-discovery, and that the film's true strength. Brian Donlevy's portrayal of Walter Willams is forceful yet understated as his odyssey unfolds. Charles Coburn (Quincy the police detective) adds depth, charm and wit. Ella Raines plays a peaches 'n cream sweetie who won this reviewer's heart.


Of all the Alpha DVDs I own, the quality of this one is bar-none THE best. Looks like a 35mm print. Alpha calls this a Film Noir, but the happy ending belies that. Good strong character development and a strong script make a difference: unlike today's weakly scripted all-action blockbusters, Impact works very well with a strong story with the reliance not on action, but some basic human qualities. Ella Raines was a girl next door type whose acting skills aren't over taxed here. Lazlo's photography is very good. Some obvious studio scenes are balanced by some good on location stuff.

Toward the end of the picture in a nicely developed sequence, Anna Mae Wong is initially reluctant to testify in court. She believes her testimony can only harm the person (I'm trying to not give the ending away) until she unwittingly remembers some facts which prove to save the neck of the accused. Impact was independently produced by Harry Popkin and distributed by United Artists in the 40's (they had no studio and relied on inde producers for their films.) Director Art Lubin worked in Hollywood for 40 years mostly on B movies, but he directed several Abbott and Costello features, the first two Technicolor features with Maria Montez and most of the Francis the Talking Mule titles.

Impact is all but forgotten today, but it is typical of the solidly crafted second features which were the backbone of Hollywood in the golden years.


I have seen this movie before on television. Afteer seeing it I immediately wanted a copy of my own on DVD. Well the quality of this dvd is second to none. you wont go wrong with your purchase. The film its self is excellant. The plot revolving around a man who is expected to be dead while his wife had him killed. So when he does show up again well lets say the sparks begin to fly. I wont ruin it for you only say this you have to see it to believe it.


IMPACT is an impressive little opus. The film contains many elements reminiscent of other films, such as Double Indemnity and Sullivan's Travels. It wastes little time in presenting the plot "set up": rich guy's wife and her lover plan to do him in via an "accident". Several clever plot twists and complications will keep you engrossed in the film. But IMPACT is less about betrayal than self-discovery, and that the film's true strength.
My first "meeting" with Brian Donlevy was courtesy of his work in the British-made Quatermass films directed(?) by Val Guest. Donlevy's stern face (some would say stone face) acting style contributed a sense of anger, impatience and/or urgency to his Professor Quatermass role. Donlevy's ready-for-anything screen presence also adds a lot to IMPACT. He was an underrated actor who delivered in all of his roles.
NOTE: IMPACT would earn 4 stars except for the fact that Charles Coburn is miscast (in an important supporting role) as a canny police detective.