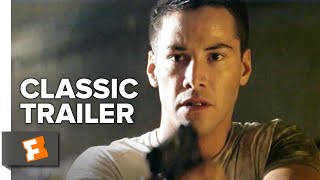 SPEED: A mad bomber (Dennis Hopper) is out for revenge against LAPD rookie cop Jack Traven (Keanu Reeves), who, with the help of his partner, Harry Temple (Jeff Daniels), foils the criminals' plot to extort money from the city by holding hostage an elevator full of people. He plants a bomb on a bus, set to arm itself when the vehicle hits 50 mph, and detonate if it drops below that speed. The hero, with the help of a beautiful passenger named Annie (Sandra Bullock), must defuse the explosive device before the bus runs out of gas. This fast-paced thriller received two Academy Awards for Best Sound and Best Sound Effects Editing, as well as a nomination for Best Film Editing.

Jack Traven is a risk-taking SWAT Team officer, pitted against a mad-bomber, Howard Payne. Howard has a pattern of coming up with ingenious, deadly schemes: for example, he rigs an L.A. bus so that, after it reaches a speed of 50 mph, it will explode if it slows to below that rate.

Indiana Jones and the Kingdom of the Crystal Skull (DVD)
$12.50 Super Savings
Add to Cart