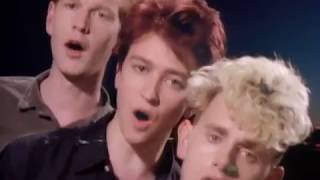 Depeche Mode: David Gahan (vocals); Martin Gore (keyboards, synthesizer, background vocals); Andrew Fletcher, Alan Wilder (keyboards, synthesizer).
Recorded at The Garden, London, England.
Having proven his abilities as a pop craftsman on the previous year's A BROKEN FRAME, DM main songwriter Martin Gore gets down to the business of developing a new sonic language for himself and his bandmates on CONSTRUCTION TIME. Earlier in its career, Depeche Mode tried to make its synthesizer-only arrangements seem warm and fuzzy, but here the band embraces the Kraftwerk-pioneered tradition of exploiting the synthesizer's inherent inorganic qualities for their intrinsic beauty.
In addition to straying further from the poppy approach of previous albums, the group incorporates industrial-oriented sounds as an important part of the arrangements, lending an ominous, machine-like tone to many of the songs. The once-chipper group's growing disenchantment with the outside world begins to flower here as well, most notably on the anti-music biz observations of "Everything Counts."

Depeche Mode
Music for the Masses
$10
Add to Cart