The Sonics Here Are the Sonics

Uncut: 5 stars out of 5 -- "[T]he clipped ferocity of early Kinks, producing rock'n'roll so rabid that even the ballads were spiked with screams."

Get email alerts for The Sonics
26 ratings
Currently Out of Stock: We'll get more as soon as possible
Notify Me When Available
Add to Wishlist
Format:  CD
item number:  ZNOR 903
Our customers love us! 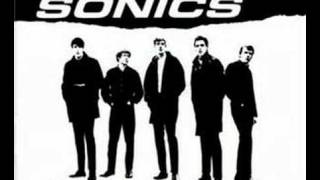 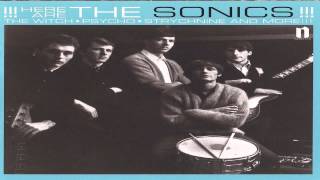 Q - p.128
4 stars out of 5 -- "Their legendary debut album is a manic thrill, with Gerry Roslie's unhinged screams punching home the band's saxed-up three-chord thrash."
Uncut - p.85
5 stars out of 5 -- "[T]he clipped ferocity of early Kinks, producing rock'n'roll so rabid that even the ballads were spiked with screams."

The Sonics: Rob Lind, Gerry Rosalie, Jerry Miller, Bob Bennett, Larry Parypa, Andy Parypa.
Recorded in 1965. Originally released on Etiquette. Includes liner notes by Miriam Linna.
Digitally remastered by Bob Irwin.
Personnel: Larry Parypa (vocals, guitar); Rob Lind (vocals, saxophone); Gerry Roslie (vocals, keyboards); Andy Parypa (vocals); Bob Bennett (drums).
Liner Note Author: Miriam Linna.
If there were a Ring Magazine ranking system for 1960s garage bands, the Sonics would be the undisputed heavyweight champs. Emerging from the same scene that birthed the Kingsmen, the Sonics were a juggernaut of raw rock-&-roll moxie and primal R&B stomp. Possessed of a sound and aesthetic that would have rendered moot any mods-v.-rockers debate, the band dropped a classic of the genre with their 1965 debut.
The album both predates and outpaces many a punk record that followed years later in terms of energy, passion, and attitude. In fact, it's hard to believe that fuzzed-out screamers such as "Psycho," "The Witch," and "Strychnine" didn't set off a tried and true musical revolution right then and there. Anyone even remotely interested in the origins of punk and the classic years of American garage should not sleep until they've purchased this album.

The Sonics
Here Are the Sonics!!! [Pocket Version]
$12.40 Super Savings
Add to Cart

39%off
The Sonics
Introducing the Sonics [Bonus Tracks]
$37.80
Add to Cart

The Sonics
Here Are the Sonics!!! [Pocket Version]
$12.40 Super Savings
Add to Cart