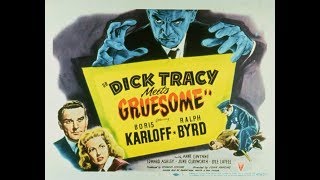 The world's most beloved comic-strip detective is vividly brought to life by Ralph Byrd in this brutal crime caper that's guaranteed to satisfy viewers with an appetite for action-packed adventure. The film gets off to a rollicking start at The Hangman's Knot, a gritty dive with an ominous neon-lit noose blinking in the bar's window, where the terrifying Gruesome (Boris Karloff) has just arrived, fresh from being sprung from the slammer. A crony informs him of a new scheme in the works that involves the use of a paralyzing gas to pull off flawless robberies. Sure enough, the evil Gruesome and his gang hold up a bank, freezing everyone inside (except Dick Tracy's gal, Tess Truehart) with the poisonous substance. It appears as though the invincible Tracy has met his match, so much so that his faithful right-hand man, Pat Patton (Lyle Latell), quips, "If I didn't know better, I'd swear we were doing business with Boris Karloff"! Undaunted, Tracy devises a clever plan to beat Gruesome at his own sinister game. Dick Tracy Meets Gruesome was the fourth and final feature about Chester Gould's larger-than-life gumshoe, a series that began in 1945 with Dick Tracy and continued with Dick Tracy vs. Cueball (1946) and Dick Tracy's Dilemma (1947).

Dick Tracy must fight a race against the clock to stop a fiendish villain named Gruesome before he unleashes a lethal gas that turns human beings into statues.

Customer Rating:
Based on 1605 ratings.


To me this is, by far, the best of the Tracy movies and the simple reason is two words: Boris Karloff! See what a master can do to save a film.


Better than average **** Tracy story. Ralph Byrd does his usual great job as Tracy, Karloff really camps it up as Gruesome. Also, be on the lookout for hidden puns, like the Scientist named A. Tomic! ;-)