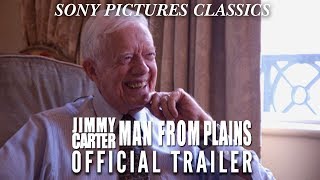 Director Jonathan Demme's career trajectory has twisted down some unexpected paths since winning an Oscar for THE SILENCE OF THE LAMBS in 1991. His dedication to producing high-quality documentary work has perhaps been the most surprising turn, and 2004's THE AGRONOMIST and 2006's NEIL YOUNG - HEART OF GOLD are among the most interesting films in his canon. Demme returns to documentary filmmaking for JIMMY CARTER MAN FROM PLAINS, which focuses on the former president's book tour in support of PALESTINE: PEACE NOT APARTHEID. The director and his subject clearly share a taste for unusual career choices, making them the perfect match for each other.

Demme and his camera crew followed Carter over a three-month period beginning in late 2006. The footage they gleaned from these mammoth sessions includes lectures and plenty of debates, many of which offer a dual perspective on both Carter's life and the media machine that hounds his every step. The most remarkable aspect of the director's film is the boundless enthusiasm Carter has at the age of 83. Faced with reporters asking him questions about a book they don't seem to have read, an endless number of signings to attend, and countless plane trips, the former president shows incredible patience and understanding. Demme and his team shoot on compact digital cameras throughout, giving them a close-up look at Carter that would have been unthinkable in less technologically advanced times. Critics of Carter are unlikely to find much to change their views here, but his supporters will be pleased, and as a portrait of the media frenzy that follows anyone who once occupied the Oval Office, JIMMY CARTER MAN FROM PLAINS makes for fascinating viewing.

Client 9: The Rise and Fall of Eliot Spitzer
$6.98 Spring Sale
Add to Cart

63%off
Unprecedented: The 2000 Presidential Election
$5.58 Spring Sale
Add to Cart

50%off
For Love of Liberty: The Story of America's Black Patriots (DVD)
$4.98 Spring Sale
Add to Cart