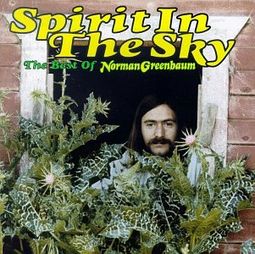 All tracks have been digitally remastered.
Audio Remasterer: Bill Inglot.
Liner Note Author: Wayne Jancik.
Photographer: Henry Diltz.
"Spirit in the Sky" was a classic one-shot hit: an unforgettable fuzz guitar riff, those eerie descending glissando psychedelic guitar effects, a soulful female backup chorus, and a rare gospel-rock song that explored a religious theme without sounding dogmatic or sappy. Greenbaum had more depth than the usual one-shot artist, but the fact is that he never came up with anything else remotely on the level of "Spirit in the Sky," as this 15-song anthology demonstrates. He was a witty, droll songwriter with slightly absurd tunes that didn't quite descend into novelty, as on "Canned Ham" and "The Day the Well Went Dry." Selections from his early-'70s Reprise albums comprise most of half of this disc, and they're amiable, mildly humorous good-time rock that isn't even as penetrating as the rawer and goofier stuff he did before his solo career as the leader of Dr. West's Medicine Show & Junk Band. Four Dr. West songs are on this CD, including the minor 1966 hit "The Eggplant That Ate Chicago," as well as a previously unreleased 1977 recording, "The Day They Sold Beer in Church." ~ Richie Unterberger

The Hollies
The Hollies' Greatest Hits
$8.80
Add to Cart

The Champs
Tequila: The Champs Greatest Hits
$15.70
Add to Cart