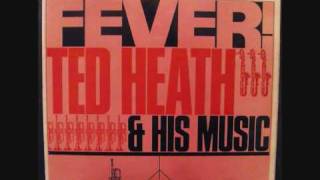 Bert Ambrose and Nat Gonella notwithstanding, arguably the finest band to come out of England was led byTed Heath. He was almost as well known in the United States as he was in the United Kingdom. He started coming to the US in 1956 as he and Stan Kenton arranged an exchange to satisfy union requirements of both countries. The band's popularity was sustained and enhanced through personal appearances and their many recordings beginning in 1944 and running through to 1977 when the band was under the leadership of Don Lusher. Although heavily influenced by Kenton, Heath managed to avoid his excesses, while at the same time his arrangements were bright and upbeat as the band featured blaring brass work. Heath made two basic types of albums -- tribute albums, such as the one for Glenn Miller, and those he called "my music," which were distinctively his own. This CD was in the latter category and comes toward the end of his involvement in the band while suffering heart problems in the late 1960's. He was always able to attract top flight musicians and this group was no exception. Long time Heath trumpet player Bert Ezard, sax players Ronnie Chamberlain and Bob Efford (who was to work with Benny Goodman and Marty Paich), and drummer Kenny Clare. Most of the tunes on this album were favored by vocalists, such as "Fever" by Peggy Lee, "Mack the Knife" by Louis Armstrong and Bobby Darin, and even "Moon River," Andy Williams's big hit. But these singers would have a hard time keeping up with fast tempos of the band. Excellent playing, tight arrangement, and sound dynamics, this album is part of the large portfolio of big band music that is Heath's legacy. ~ Dave Nathan