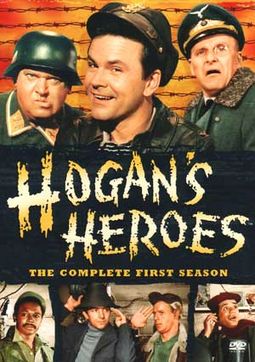 Fall in line for the hilarious escapades of a ragtag band of World War II prisoners of war in Hogan's Heroes: The Complete First Season, completely re-mastered in high definition. Actor-comedian Bob Crane stars as Colonel Robert Hogan, an American officer confined to Stalag 13, a German POQ camp. Along with a motley crew of fellow prisoners, and with full use of hidden tunnels, confiscated supplies and secret radios, Hogan's mission is not so much one of escape - but to cause as much havoc and disruption to the Nazi war effort as possible. And with inept camp commandant Colonel Wilhelm Klink (Werner Klemperer) and the bumbling Sergeant Hans Schultz (John Banner) running things at Stalag 13, the gang known as Hogan's Heroes soon discovers that their laugh-provoking efforts at sabotage, surveillance and subversion have never been easier! Co-starring Robert Clary (as LeBeau), Richard Dawson (Newkirk), Ivan Dixon (Kinchloe), Larry Hovis (Carter) and Cynthia Lynn (Helga), here's the complete first season of the top-rated TV sitcom that released a blitzkrieg of laughs.

Despite a historically and morally questionable premise, the 1960s sitcom HOGAN'S HEROES was wildly popular during its premiere run and continues to remain one of the most classic (not to mention utterly unique) comedy series in television history. Set in a Nazi prison camp during World War II, the series follows a group of Allied POWs--Englishman Peter Newkirk (a pre-FAMILY FEUD Richard Dawson), Frenchman Louis LeBeau (Robert Clary), and Americans Andrew Carter (Larry Hovis) and James Kinchloe (Ivan Dixon, one of the first African-American actors to get equal billing)--led by the irrepressible Colonel Robert Hogan (Bob Crane) in their hilarious attempts to sabotage the Nazi war effort. Though often mischaracterized as a tasteless gloss on the real-life horrors of Nazi Germany (the series was set in a prisoner-of-war camp, rather than concentration camp), HOGAN'S HEROES was intended as parody and certainly pulled no punches in its unflattering depiction of idiotic Nazi officers such as the pompous Colonel Klink (Werner Klemperer), bumbling Sergeant Schultz (John Banner), and irascible General Burkhalter (Leon Askin)--in fact, Klemperer, Banner, and Askin were all Jewish, and Clary was a Holocaust survivor. This collection includes all 32 episodes of the controversial series' debut season, which was nominated for two Emmy Awards.