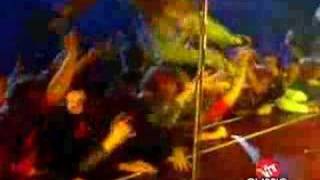 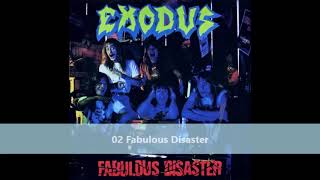 After years struggling for recognition while watching their peers achieve fame and fortune, Bay Area mainstays Exodus had every reason to be dejected when they re-grouped in 1989 to record their third album Fabulous Disaster. Still, they went on to create their most diverse and carefully conceived effort yet, while remaining faithful to their no-frills thrash ethic. But while the album represented the realization of their vision, as well as their commercial peak, it still failed to gain them their well-deserved place alongside such thrash metal giants as Metallica, Anthrax and Slayer. After a random spoken word intro, opener "The Last Act of Defiance" quickly sets the frenzied pace, taken a step further by the title track's highly amusing apocalyptic vision. Both songs also showcase the amazingly fast feet and incomparable fills of Tom Hunting -- the only human capable of challenging Slayer's Dave Lombardo for bragging rights as thrash metal's greatest drummer. Up next, "The Toxic Waltz" provides a fresh take on the band's mosh classic "A Lesson in Violence," and the more complex "Cajun Hell" also succeeds despite its silly lyrics. Significantly more intelligent, the eight-minute epic "Like Father, Like Son" is another show of maturity, and other highlights like "Corruption" and "Verbal Razors" exhibit the blinding precision and speed of Gary Holt and Rick Hunolt -- arguably the best, and definitely the most over-looked, lead guitar tag team in the genre. Finally, two choice cover versions of AC/DC's "Overdose" and the Southern Californian classic "Low Rider" adds just enough flavor and humor to the proceedings. ~ Eduardo Rivadavia