Letting Go of Your Past Is Hard... Especially When It's Dating Your Mom.

Out of Print: Future availability is unknown
Notify Me When Available
Add to Wishlist
Format:  DVD
sku:  69J2C
Different formats available:
Mr. Woodcock (Blu-ray) for $13.40
Our customers love us! 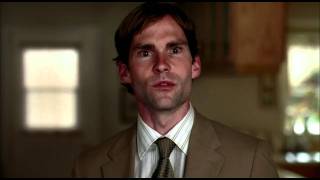 With BAD SANTA, Billy Bob Thornton proved he was willing to go all the way--no holds barred--in portraying unsympathetic, foulmouthed jerks. Here he brings that same skill to bear as the title character, a sadistic junior high school gym teacher who is every uncoordinated or overweight student's worst nightmare. Best-selling author of self-help books, Farley (Sean William Scott) thinks the tortures he's suffered at the hands of Woodcock are just the stuff of traumatic childhood memory (such as being told, "You are a disgrace to fat, gelatinous kids the world over"), until he goes home to Nebraska to pick up an award and learns his widowed mother (Susan Sarandon) is in love with the man who made him miserable all those years ago. Farley recruits his unkempt buddy (Ethan Suplee) in a series of backfiring schemes to wreak some belated vengeance and expose Woodcock before the nuptials are sealed. There's plenty of nasty repartee between Scott and Thornton and some funny-disturbing bits from side characters, like Farley's ferocious publicist (Amy Poehler) and Bill Macy as Woodcock's even more sadistic father. Sarandon brings a lot of touching innocence to the table as a sheltered widow daring to feel love again, and Scott does some nice squirming and pratfalls. But of course it's Thornton's movie all the way--he grabs the ball and never lets it go, unless of course it's to hurl it at some poor kid's head.

As a chubby 7th grader, John Farley (Seann William Scott) and his friends were helpless against the most evil man on the planet - their P.E. teacher Mr. Woodcock (Billy Bob Thornton).
Flash forward years later - John, now successful, thin and able to do a pull-up, returns to his hometown only to discover that Mr. Woodcock is still in his life ...and dating his mum (Susan Sarandon)! John vows to do whatever it takes to stop their relationship, but Woodcock has plans of his own - and they don't include losing.
It's a face-off of outrageous proportions in this no-holds barred comedy directed by Aussie-born Craig Gillespie (Lars and the Real Girl) and co-starring Amy Poehler (Blades of Glory) and My Name is Earl's Ethan Suplee.

68%off
Willy Wonka and the Chocolate Factory (Blu-ray)
$9.09 on Sale
Add to Cart

30%off
School for Scoundrels (Unrated Ballbuster Ed.)
$6.98 on Sale
Add to Cart

Employee of the Month
$8.70 Super Savings
Add to Cart