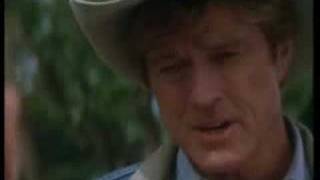 Robert Redford directs this compelling story of 14-year-old Grace MacLean (Scarlett Johansson), who is emotionally and physically scarred after suffering a terrible accident while riding her prized horse, Pilgrim. Desperate to help her daughter, Grace's mother, Annie (Kristin Scott Thomas), a high-powered magazine editor, launches an all-out campaign to find a horse whisperer, someone with a unique gift for curing troubled horses. She learns of Tom Booker (Redford), who works to rebuild all the lives shattered by the accident. Love blossoms between the horseman and the uprooted sophisticate, resulting in unexpected consequences. The film was based on the popular novel by Nicholas Evans.

A terrible horseback riding accident has left 14-year-old Grace MacLean (Scarlett Johansson) emotionally and physically scarred for life, and has left her prized horse, Pilgrim, permanently spooked. Grace's mother, Annie (Kristin Scott Thomas)--a high-powered New York magazine editor--is unwilling to believe that Pilgrim is beyond help and is desperate to help her daughter recover from the trauma. Annie drives across the country to Montana, with daughter and horse in tow, in search of Tom Booker (Robert Redford) a horse whisperer with a special gift for communicating with troubled horses. With Tom's help, both Grace and Pilgrim begin to deal with the aftermath of the accident. Annie, meanwhile, begins to reevaluate the choices she has made in life as she becomes enamored with both Booker and life on a Montana ranch. Sam Neill plays Robert MacLean, the husband and father left behind in New York when mother and daughter make their trek. Directed by Redford (ORDINARY PEOPLE, QUIZ SHOW) and based on Nicholas Evans's popular novel of the same name, the film features sweeping Montana vistas, earnest performances, and impressive horseback riding and training sequences.

Romance | Theatrical Release | Horses | Affairs | Based On A Novel

17%off
Spirit: Stallion of the Cimarron
$12.50 Super Savings
Add to Cart

A River Runs Through It
$8.40 Super Savings
Add to Cart