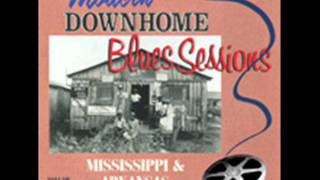 Performers include: Elmore James, Howling Wolf, Pinetop Slim, Tiny webb, Sunny Blair, Jesse Thomas, Joe Hill Louis, Smokey Hogg, Baby Face Turner.
Contains 24 tracks.
The bulky title of this disc was sparked by its documentation of recordings assembled by Joe Bihari of Modern Records on scouting trips through the South for talent between 1948 and 1953. (Starting in 1952, the young Ike Turner also worked for Modern in this capacity.) Just two of the names on this 24-track anthology are famous: Howlin' Wolf, represented by an audition acetate of "Riding in the Moonlight" (first issued in 1991), and Elmore James, whose two cuts appeared on an Ace box set in 1993. Some other names -- like Smokey Hogg, Lil' Son Jackson, and Joe Hill Louis -- will catch the eyes of in-the-know blues experts, but for the most part even those with extensive blues collections will be mostly or totally unfamiliar with most of the artists. This is raw, Southern, just-post-World War II blues, caught in its transition from its rural roots to something more electric and citified. Certainly it's rawer than much commercially released blues of the time, and in fact about half of it was either previously unissued, or not first issued until many years later on other specialist collections. It's not that unhoned, though, and there's decent variety within the genre, from rollicking piano blues and juke-joint harmonica-driven numbers to mournful slow tunes that sound barely off the farm. Actually Arkansas Johnny Todd's "I'll Be Glad When You're Dead, You Rascal You" sounds like it's still on the farm. But at the other extreme, Sunny Blair's "Please Send My Baby Back Home" (aka "Step Back Baby") is as well-produced and full-sounding as many a 1953 full-band electric Chicago blues single. This is not for everyone, certainly, but as a reflection of the sounds being unearthed as labels brought musicians from out-of-the-way Southern locales into the commercial world, it has considerable value. And the music is solid, if not as gripping as the best records in these styles. The fidelity is imperfect, as many of the tracks were taken from acetates or 78s, but has been cleaned up considerably by modern technology. ~ Richie Unterberger

New
Kenny Vance and The Planotones
Soundtrack to the Doo Wop Era: A Kenny Vance Collection
$13.60
Add to Cart