At Any Price R

How far will you go to chase a dream? 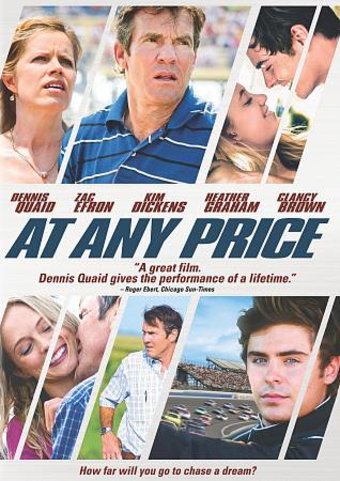 The son of a prominent seed farmer defies his father's wishes to take over the family business by choosing to become a professional race-car driver in this earnest family drama from director Ramin Bahrani (GOODBYE SOLO). Former high-school quarterback Henry Whipple (Dennis Quaid) has worked hard to maintain his father's lucrative farming empire. He always dreamt of passing the family business along to his beloved oldest son Grant, though when Grant leaves the farm to explore the world, Henry places his hopes for the future on the shoulders of his youngest son Dean (Zac Efron), who would rather be racing stock cars than working the soil. Meanwhile, fellow farmer Jim Johnson (Clancy Brown) has been poaching away Henry's customers while steadily expanding his own thriving business. As Henry attempts to win back those straying clients, Dean begins to make a name for himself on the local race circuit. A talented driver despite his reckless streak, Dean soon gets a shot at the big time thanks in large part to the support of his mother Irene (Kim Dickens) and his girlfriend Cadence (Maika Monroe), the latter of whom hails from a broken home, and has settled into a comfortable place amongst the Whipple clan. When a powerful producer of genetically modified seeds receives a tip that Henry has been cleaning and reselling their product, they launch a surprise investigation into his business that threatens to shut it down. With Henry's future looking bleak as his younger lover (Heather Graham) sets her sights on Dean and the seed company expands the scope of their investigation, the desperate farmer finds that the worst is still yet to come when a tragic accident threatens to take it all away.

The Exception
$19
Add to Cart