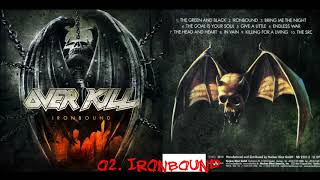 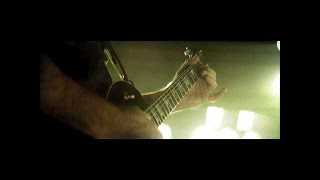 Although during the heyday of '80s thrash, they were frequently overshadowed by more inventive, consistent, or commercial competitors (you know, little bands like Metallica, Anthrax, Slayer, etc.), New Jersey's Overkill have since outlasted, out-produced, and certainly out-moshed many former foes. Add to that nearly 30 years of hard toil and trauma, ranging from your everyday bandmember turnover (and lots of it) to watching your singer suffer a minor stroke on-stage (!) for little glory and littler bank accounts, and one can totally understand why the steadfast Overkill christened their fifteenth studio album Ironbound. Their first release for the E1/Koch label, it joins a string of gradually resurgent new millennium predecessors (the '90s were mostly wasted with fruitless groove metal dabbling) in reasserting the band's purest thrash fundamentals -- just when hundreds of younger bands were busy copying their every trick. And, having obviously been inspired by recent efforts from old contemporaries like Metallica, Exodus, and Vio-Lence (via Robb Flynn's current band, Machine Head), Overkill have surprisingly gone "epic" like never before on Ironbound; chucking their three-minute standards in the trash bin so as to crank out a number of songs both longer and more elaborate, if no less frantic, than usual. Take Blue ™yster Cult-referencing opener "The Green and Black," for example, which astonishingly breaches the eight-minute mark amid a "Master of Puppets"-like multitude of riffs, fast and slow tempos, hard/soft dynamics, opening the door to further displays of technique and imagination like the motivational screech of a title track, the religion-damning "The Goal Is Your Soul," and the downright philosophical "Killing for a Living" (where Bobby Blitz occasionally seems to be speaking in tongues). But fans hungering for the simpler, frill-free, slam-dancing pleasures of Overkill at their most manic need not fear; there are also plenty of decapitating double kickdrum-driven onslaughts like "Bring Me the Night," "Endless War," and "The SRC," to be found here, that'll put them all in neck braces. In combination, both strains even each other out and produce a welcome, fresh mixture of variety and familiarity for dyed-in-the-wool Overkill fans to froth and flail over, without suffering through reminders of the ill-advised experiments of the band's lost years. ~ Eduardo Rivadavia