A tough cop. A brilliant killer. An unspeakable crime. 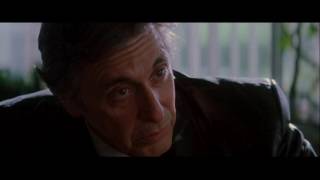 In a remote Alaskan town called Nightmute, the murder of a teenage girl has shocked the tight-knit community. The Los Angeles Police Department sends two of its cops--both under investigation by Internal Affairs--to try to solve the crime in Christopher Nolan's film based on Erik Skjoldbjærg's 1997 Norwegian film starring Stellan Skarsgård. The experienced, weathered Will Dormer (Al Pacino) has nothing in life except for the force. His younger partner, Hap (Martin Donovan), has a family to support and is willing to turn state's evidence to protect them. Local cop Ellie Burr is excited to work with her hero, Dormer--until she starts uncovering some questionable situations. It isn't long before Dormer finds the murderer--writer Walter Finch, played with subtle nuances by Robin Williams--but Finch knows a secret that could bring Dormer down. Director Nolan, who stunned audiences with 2001's inventive MEMENTO, here crafts an atmospheric psychological thriller that is bathed in whites and grays. The acting is uniformly excellent, especially Pacino's performance as a cop on the edge and Williams as a soft-spoken, low-rent crime novelist. Because it never gets dark in Alaska at this time of year, Dormer (a play off the Spanish word "dormir," which means "to sleep") is unable to fall asleep, light always streaming into his hotel room; watching him slowly unravel is a treat.

Robin Williams
Weapons of Self Destruction (DVD)
$14.50
Add to Cart