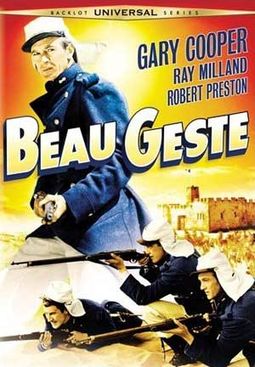 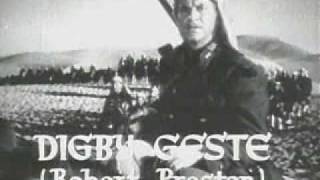 "The love of a man for a woman waxes and wanes like the moon, but the love of brother for brother is steadfast as the stars and endures like the word of the prophet..."
- Arabian proverb featured in the film's foreword
"Keep shooting, you scum! You'll get a chance yet to die with your boots on!"
- Markoff (Brian Donlevy)

The theft of an enormous gem, the Blue Water, sends the three notoriously adventuresome Geste brothers into the French Foreign Legion. Gary Coper, Ray Milland, and Robert Preston boldly play the three loyal siblings who have taken the rap to save the female culprit. Assigned to a desert command, they suffer cruelties under the heavy hand of Sergeant Markoff (Brian Donlevy) and then come upon a mysterious tragedy at their fort. Produced in a giant sweep with hard-edged realism by director William Wellman, this version of BEAU GESTE is the classic one, featuring fine turns from Cooper, Milland, and Preston as well as Donlevy and Susan Hayward. Based on the epic novel by Percival Christopher Wren, the film has been remade and parodied several times. Don't miss the beginning--the haunting opening sequence is one of the most famous in Hollywood history.

BEAU GESTE is the oft-made adventure tale that tells the story of three brothers who "confess" to stealing a rare gem in order to save the real thief. The brothers-in-arms battle the elements and their enemies to live long enough to clear the family name.