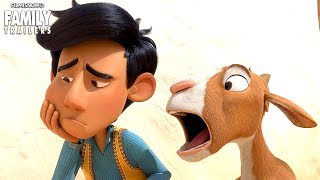 UP AND AWAY (2018) Trailer - Animated Family Adventure Movie

Hodja lives in a small desert village with his parents and faithful goat Raya but spends his days dreaming about the big, adventurous world beyond the mountains on the horizon. Hodja's father is not supportive of his son's dreams and insists he stay put because the world is not adventurous but rather incredibly dangerous. When Hodja is asked to visit the capital city of Petto on a fantastical flying carpet and bring back a village man's young grandchild, he grabs it with both hands. Upon arriving in the chaotic capital, however, Hodja's magic carpet is stolen by one of the sultan's goons. At his lowest point Hodja meets a clever girl named Emerald who offers to help him sneak into the palace and get the carpet back.
This product is made-on-demand by the manufacturer using DVD-R recordable media. Almost all DVD players can play DVD-Rs (except for some older models made before 2000) - please consult your owner's manual for formats compatible with your player. These DVD-Rs may not play on all computers or DVD player/recorders. To address this, the manufacturer recommends viewing this product on a DVD player that does not have recording capability.

The Mr. Magoo Show Volume 4
99¢ Out of Stock
Save for Later