Johnny Tillotson It Keeps Right on A-Hurtin'/You Never Can Stop Me...

Record Collector (magazine): 3 stars out of 5 -- "His production sound was clean, polished and ultimately professional, aided by the fact that he could actually sing well." 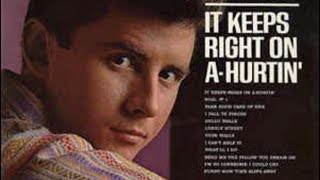 Johnny Tillotson - It Keeps Right On A Hurtin' (Music Video) 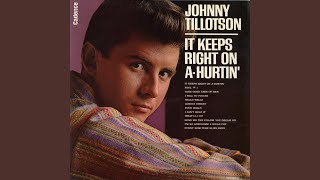 The mutual admiration society of Cadence records and Johnny Tillotson continues with a further 2-On-1 release of a pair of his most popular albums for Cadence Records. These two have never been released complete on UK CD before, and between then they cover the years 1962-64, when Cadence folded and Johnny moved to MGM. 'It Keeps Right on a Hurtin' was a huge pop and country hit for Johnny - who composed it himself, in tribute to his musical hero Hank Williams - and both that song and the whole album were recorded in Nashville, using the City's A-list musicians. "You Can Never Stop Me Loving You" is more pop-oriented and features JT on a selection of hits of the late 50s by the likes of Rick Nelson, Ritchie Valens and Frankie Avalon as well as the title track, originally a UK hit for our very own Kenny Lynch. This package also features a desirable 'collector bonus' in the form of the first take of 'It Keeps Right on a Hurtin' (the master was take 7) - which has never been issued before, anywhere in the world. ACE2007.

Johnny Tillotson
You're the Reason: The Best of the MGM Years (CD)
$13.60
Add to Cart

93%off
The Country Collection: 20 Greatest Hits
98¢ on Sale
Add to Cart