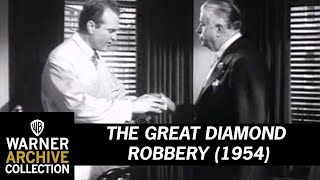 Red Skelton was already a presence on early TV, brining creations like Clem Kadiddlehopper and Freddie the Freeloader into millions of living rooms, when he made his last film for MGM, the studio that had been his movie home since 1940.

The beloved funnyman portrays diamond cutter Ambrose C. Park, who is eager to demonstrate his talent to his employer by working on the rare Blue Goddess diamond. It's a delicate task. One mistake and the gem will be worthless. Two mistakes: it'll be worthlesser! But Park confidently takes on the job, accompanied by criminals who have convinced him they're his long-lost family and who secretly aim to steal the diamond after it's cut. Will Park find out he's being hoodwinked before it's too late?

MGM was never quite sure what to do with their resident funster Red Skelton, and THE GREAT DIAMOND ROBBERY betrays this uncertainty. Skelton plays Ambrose C. Park, a diamond cutter who is led to believe that he's the long-lost heir to a fortune. Actually, Ambrose has been duped by shyster lawyer Remlick (James Whitmore), who is in cahoots with criminal mastermind Louie (Kurt Kaznar). Convinced that he's being a dutiful nephew, Ambrose helps the crooks steal a valuable diamond, then agrees to cut the jewel himself. There's way too much plot and not enough Skelton in this 69-minute programmer, but Red manages to collect a few loose chuckles along the way. GREAT DIAMOND ROBBERY leading lady Cara Williams was later more memorably teamed with Skelton in the 1962 TV special "Freddie and the Yuletide Doll."

Crime | Families | Parties | Criminals
This product is made-on-demand by the manufacturer using DVD-R recordable media. Almost all DVD players can play DVD-Rs (except for some older models made before 2000) - please consult your owner's manual for formats compatible with your player. These DVD-Rs may not play on all computers or DVD player/recorders. To address this, the manufacturer recommends viewing this product on a DVD player that does not have recording capability.