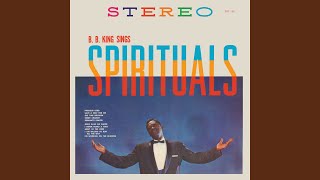 Recorded in Hollywood, California in 1959. Includes liner notes by Frank Evans and Neil Slaven.
Most people think of King in terms of the image he presents on stage, a rambunctious, hard-living cosmopolitan bluesman, full of grit and gusto. What this assessment leaves out however, is the Gospel music that influenced King early on and is an essential element in his musical roots. This 1959 recording, then, is more of a return to the fold than some left-field departure into unfamiliar territory. SPIRITUALS is probably unique in King's catalogue, in that he doesn't play a lick of guitar on the whole thing. These aren't blues adaptations of spiritual tunes, but traditional Gospel treatments, featuring organ and piano in the classic style. From "Save a Seat For Me" to "Army Of the Lord," King's big, warm voice is full of emotion and commitment. The bluesman acquits himself admirably as a full-bodied singer of spirituals, prompting listeners to wonder what might have happened if he had gone down the Gospel road full-time.

The Sensational Nightingales
Let Us Encourage You
$11.80
Add to Cart