Get email alerts for Roberta Flack
Available: Usually ships in 3-5 business days
Add to Cart
Add to Wishlist
Format:  CD
sku:  9Q54
Related products:
Reflections: Carly Simon's Greatest Hits for $8.20
Softly With These Songs: The Best of Roberta Flack for $8.98
The Very Best of Dionne Warwick [Rhino] for $8.98
A Donny Hathaway Collection for $10.98
Roberta Flack: Love Songs for $12.50
92% recommend us! 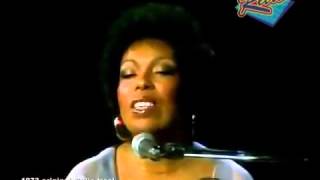 This 2006 Atlantic/Rhino set rivals 1993's SOFTLY WITH THESE SONGS: THE BEST OF ROBERTA FLACK as the Roberta Flack compilation to own. With 17 pristine remastered tracks, BEST OF includes all of the soul singer's most essential performances. Flack's best-known songs are still some of her finest, and those--"Killing Me Softly with His Song," "The First Time Ever I Saw Your Face," and her duets with Donny Hathaway, "Where Is the Love" and "The Closer I Get to You"--are all here, of course.
But nearly every track is a winner, with a fair representation of Flack's '80s work (such as her duet with Peabo Bryson, "Tonight, I Celebrate My Love") and even a track from the '90s ("Set the Night to Music," a duet with Maxi Priest). Flack's gorgeous instrument of a voice and her impassioned delivery sound as soothing and sensual now as they did when they first made waves in the early '70s (and maybe even more so), making BEST OF a worthwhile place to stop for anyone with even a passing interest in her work.

80%off
Peabo Bryson / Roberta Flack
For Your Love / Tonight, I Celebrate My Love
99¢ Spring Sale
Add to Cart
(2)