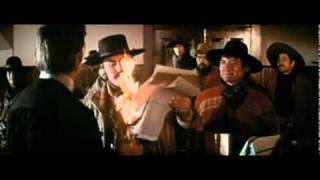 Joe Kidd, which concerns a land war in New Mexico at the turn of the century, marks Clint Eastwood at the top of his form as a western hero. Filmed in 1971, the classic backdrop of the High Sierras, the top-notch acting skills of Robert Duvall and the rugged Eastwood as a "hired gun" who takes action based on his own particular sense of justice. And like a very classic western, it has gunfights, conflicts and a slam-bang finale which has a locomotive being driven through a saloon where the bad guys are hiding.

Clint Eastwood stars as the title character in this low-key, moderately politicized variation of his spaghetti Westerns. In New Mexico in the late 1890s, the fiery Louis Chama (John Saxon) leads a group of Mexican-American peasants in a fight for their land after the evidence of their ownership has been destroyed in a questionable courthouse fire. The wealthy Frank Harlan (Robert Duvall), who also lays claim to the disputed land, has decided to bypass the legal system and hires a group of killers to take care of Chama. Kidd, who initially rejects Harlan's offer to join his hunting party, changes his mind when he finds that Chama has stolen some of his horses and brutalized one of his ranch hands. However, after seeing Harlan randomly pick off some Mexicans and becoming interested in Helen Sanchez (Stella Garcia), Kidd begins to think twice about his current employer. After he frees a group of hostages who are about to be mowed down by Harlan and his men, he takes off into the hills with Chama. Given the participants, JOE KIDD should have been much better, as it is somewhat hamstrung by an Elmore Leonard script that seems bored with its characters. That said, Duvall and Eastwood are excellent, as is Bruce Surtees' camerawork.

When a violent struggle ensues between a group of Mexican-American peasants and a corrupt landowner who wants to dispossess them of their property, Joe Kidd, who himself owns a small plot of land, is drawn into the battle as the landowner hires him to kill the leader of the uprising. Kidd soon realizes the immorality of his mission, however, and he switches his allegiance to the other side. Now it's the landowner who's going to have to watch out....