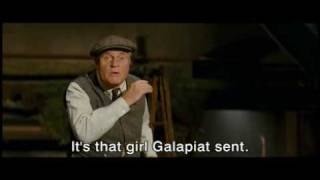 French writer-director Christophe Barratier follows up his nuanced period-drama, THE CHORUS (2004), with this feature about obsessive love and the behind-the-scenes machinations of a prewar Parisian music hall. The year is 1936, and on the outskirts of the French capital the workers of the Chansonia theater look for a way to reopen their former workplace following its inglorious demise. Barratier's film follows former Chansonia stagehand Pigoil (Gérard Jugnot) as he attempts to reopen the theater while fighting off some devastating personal losses. Pigoil hits paydirt when he unearths the radiant singer Douce (Nora Arnezeder), but a battle for her heart between the morally repugnant new boss of the theater, Galapiat (played by Bernard-Pierre Donnadieu), and the handsome electrician, Milou (Clovis Cornillac), threatens to quash the Chansonia's sudden upswing.

Barratier's zippy camerawork and impressive attention to period detail are reminiscent of Coen brothers films such as MILLER'S CROSSING (1990) and THE HUDSUCKER PROXY (1994). Cinematographer Tom Stern deserves credit for giving PARIS 36 much of its visual flair, and the collected cast members strike a fine balance between funny and sad throughout. Numerous references to classic musicals come thick and fast as Barratier's film unfolds, and the song-and-dance numbers make a neat counterpoint to the often-harrowing offstage drama. Jugnot is especially impressive as the beleaguered Pigoil, and Arnezeder, with just a handful of prior screen appearances to her name, is a joy to watch. Barratier cleverly mixes in some of the tumultuous political sentiment of the era by starkly contrasting the leftist workers of the Chansonia with the right-wing leanings of Galapiat and his merciless cronies, helping to make PARIS 36 a heady and often deeply amusing snapshot of an era.

Music halls. Romance and danger. This is Paris, 1936. Set in a suburb of north-east Paris between December 1935 and July 1936 during the "revolutionary" period of the Popular Front (who introduced the first paid holidays and a shorter working week). Three unemployed performers decide to take over by force the music hall where they worked a few months earlier and stage a show there.

April and the Extraordinary World
$12.50 Super Savings
Add to Cart