How many times does it take to steal the same diamond? 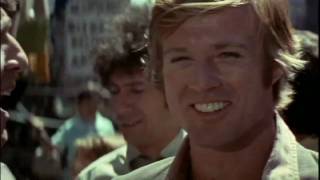 Robert Redford, George Segal and Zero Mostel head a crack cast in this hilarious comedy about jewel thieves out to score the biggest heist of their lives.

When John Dortmunder (Redford) learns that a huge, rare diamond is just waiting to be lifted in Manhattan, he assembles a team of pros to try to steal the stone. But all that glitters is not easily gotten, and, despite their careful planning and execution, actually stealing the gem proves a challenge far greater than any of the men bargained for.

THE HOT ROCK is an hysterical heist picture in which a sophisticated gang of thieves (including Robert Redford, George Segal, and Zero Mostel) falls victim to a slapstick comedy of errors while trying to lift a giant diamond from a heavily guarded museum. The screenplay by William Goldman is based on the novel by Donald E. Westlake.

All About the Benjamins
$6.40
Add to Cart