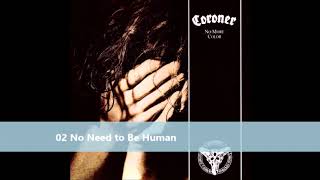 1989's No More Color finds Swiss trio Coroner in transition mode between the technically skilled, but still relatively conventional Euro-thrash metal heard on their first two albums, and the truly distinctive thinking man's avant-thrash of the two discs yet to come. In other words, this is the point in which the group's desire to think begins overtaking their desire to thrash. But even as their need for speed dissipates, the band's creative instincts are given the chance to catch up with their virtuosic execution, a development made all the more evident by the less restrictive, more elastic production values extracted by Saxon producer Pete Hinton. As a result, Coroner's previously fast-improving songwriting skills are the only minor casualty of No More Color's otherwise sound evolutionary improvements, as excessively complex new offerings like "Die By My Hand," "No Need to be Human," and "D.O.A." become a little harder to differentiate from the pack. When it all comes together, however, such as on the excellent "Mistress of Deception" and "Tunnel of Pain," the album represents Coroner at their most accessible and mature to date. Also, as was becoming tradition by now, the album's closing track is where Coroner really takes a chance. On previous and subsequent outings, this "experiment" usually took the shape of unexpected cover versions, but here, cryptic closing track "Last Entertainment" is both a band original and a remarkable study in ambient thrash -- its manic thrashing offset by atmospheric synthesizer effects and a spooky echo-laden recitation topping it off. A fittingly forward-thinking ending, indeed, as the band would firmly establish their legacy with their next, groundbreaking effort, Mental Vortex. ~ Eduardo Rivadavia