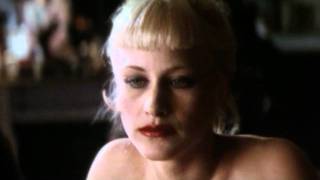 "I like to remember things my own way...How I remember them. Not necessarily the way they happened."
- Fred Madison (Bill Pullman)

Director David Lynch ups the weird ante with this "psychological fugue." Fred Madison (Bill Pullman) is a jazz saxophonist who is married to the beautiful Renee (a brown-haired Patricia Arquette). After receiving menacing videotapes taken from inside their home, the couple begin to worry. Fred's fear is compounded when he meets a mysterious man (Robert Blake) at a flamboyant party. Fred wakes up to discover that Renee has been murdered, and Fred is convicted of the crime. Trouble is, he doesn't remember anything from that night. Sitting in a jail cell, he undergoes a miraculous transformation, waking up as Pete Dayton (Balthazar Getty), a young mechanic. When Pete meets a dangerous client's sexy girlfriend, Alice Wakefield (a blonde Arquette), a passionate affair blossoms that threatens to expose Pete.
In typical Lynch fashion, he makes no effort whatsoever to explain his film or justify its bizarre occurrences, resulting in an enigmatic thriller that feels like the viewer has unknowingly walked into another person's dream. The screenplay adheres to many universal film noir conventions, but Lynch and co-screenwriter Barry Gifford's psychological angle gives them a freedom to do anything that they so desire (a concept they giddily embrace). For fans of surreal, visually arresting cinema, Lynch delivers once again.

Oddball auteur David Lynch takes viewers on another surreal journey in this highly enigmatic neo-noir. The story concerns a jazz musician (Bill Pullman) who is tormented by his cheating wife (Patricia Arquette), haunted by a spectral demon, and ultimately accused of his wife's brutal slaying, which he doesn't remember. Then "plot two" takes over as the musician switches roles with a mechanic who launches an affair with the seductive moll (Arquette again) of a dangerous gangster. Lynch leaves it up to the audience to connect the dots, which makes for a challenging, though exhilarating, motion picture.