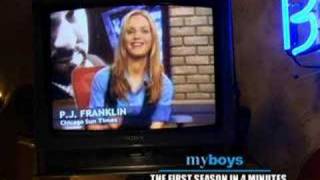 Meet PJ Franklin, a sportswriter living in Chicago who, at first glance, might seem like a typical young woman. But PJ (Jordana Spiro) is both blessed and cursed with an unconventional "family": a gaggle of platonic male friends consisting of men she's known her whole life--including her older brother--and a few newbies, as well. The boys are PJ's main line of support and a constant source of amusement...but they also pose a problem when it comes to her dating life. Potential suitors never seem to know what to make of all the important guys with whom PJ has surrounded herself. Charmingly loaferish comedian Jim Gaffigan is among a substantial cast of male friends in this funny look at modern relationships.

A comedy/drama centering on PJ Franklin a twenty-something female sports writer for the Chigaco Sun-Times, whose 'family' consists of a bunch of lovable guys who share all her favorite pastimes - sports, poker and beer, but finding a boyfriend and making a future for herself can be tricky for a girl with so many men in her life! Starring hot new talent Jordana Spiro (Must Love Dogs).