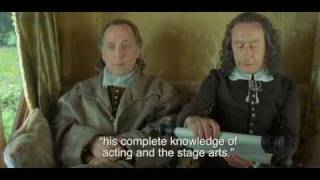 Moliere, the French 17th century playwright behind THE MISANTHROPE and TARTUFFE, gets his SHAKESPEARE IN LOVE treatment in this entertaining romantic comedy-drama. Director Laurent Tirard paints a romantic portrait of the artist as a young man that's a deft mix of fact and fiction, involving wealthy buffoon Jourdain (Fabrice Luchini) who enlists Moliere's help to woo the icy Marquise Celimene (SWIMMING POOL's Ludivigne Sagnier). Jourdain's neglected wife (Laura Morante) regards Moliere's presence in their manor with suspicion (he's posing as a religious scholar). The callow Moliere finds himself drawn to Madame, despite her doubts, and she to him, especially when he helps her in aiding the forbidden romance of her daughter. Backed by a robust orchestral score, sumptuous period detail, and plenty of pratfall-suffused romantic entanglements (lifted from Moliere's plays), the movie bravely steps outside its dramatic outline to become a moving meditation on the meaning of love as selflessness, in the best French tradition of intellectual and romantic discourse. Romain Duris (THE BEAT MY HEART SKIPPED) is endearingly mangy as Moliere, but it's Morante who scores highest, playing yet another in Gallic cinema's many celebrated sexy, intelligent older women. It's in French with English subtitles.

The Rules of the Game (Criterion Collection)
$26.10 Super Savings
Add to Cart

The Rules of the Game (Blu-ray, Criterion Collection)
$34.90 Super Savings
Add to Cart

73%off
Movie Music Man: A Portrait of Lalo Schifrin
$3.98 on Sale
Add to Cart