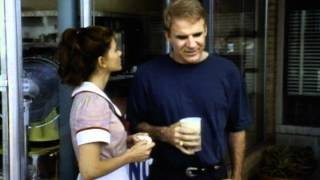 Con-man Reverend Jonas Nightengale (Steve Martin) trades salvation for donations to his touring ministry. When his tour bus breaks down in an impoverished farm town, he falls for a beautiful skeptic and learns a lesson about real miracles. See "Elmer Gantry" for an interesting comparison.

Jonas Nightengale, an evangelical huckster, decides to set up camp in Rustwater, Kansas, a small farming town hard-hit by drought, where one of his vans has broken down. Saying the people of Rustwater have no extra money to waste on phony miracles, the sheriff urges Jonas to move on; the minister, however, sees a town in trouble and he knows that means a quick profit from people desperate for hope. With the help of well-researched assistants, who have combed the town for information and gossip, and a manager who feeds him cues via a radio transmitter, he easily convinces people of his powers.
But then, one night, Jonas Nightengale performs an actual miracle, and suddenly his world is turned upside down.