From gentle to mental.

679K ratings
Currently Out of Stock: We'll get more as soon as possible
Notify Me When Available
Add to Wishlist
Format:  Blu-ray
item number:  XD 42316BR
91% recommend us! 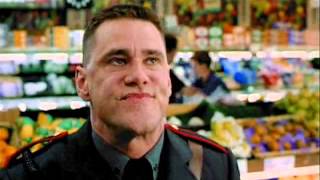 In the Farrelly Brothers' ME, MYSELF & IRENE, Jim Carrey plays Charlie Baileygates, a Rhode Island State Trooper who develops a split personality disorder after his wife leaves him for an African-American midget genius. Due to years of denial and repression while raising triplet sons left behind by his wife and her lover, Charlie finally gets fed up with people taking advantage of his meek nature and snaps, taking on a lewd, aggressive second personality named Hank. Soon afterwards, Charlie is assigned by the police department to protect a woman named Irene (Renée Zellweger), who's being followed by some shady characters who want her dead. As the pair attempt to outwit their pursuers, the kind-hearted Charlie begins to fall for Irene, while battling his sleazy alter ego, Hank.

Back in full comedy mode after his more dramatic roles in THE TRUMAN SHOW and MAN ON THE MOON, Carrey once again displays his outlandish brand of physical humor. As with any Farrelly Brothers film, there are plenty of grossly funny yet good-natured moments. (In fact, Charlie's loving relationship with his three brilliant half-African-American sons is one of the film's best and funniest subplots.) Above all, it is the way that Carrey juggles the extreme personalities of Charlie and Hank--basically waging war against himself--that shows why he is one of Hollywood's best comedic actors.