Five Criminals. One Line Up. No Coincidence. 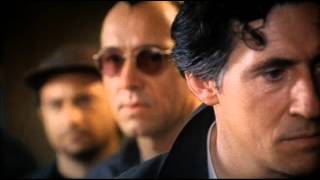 "What I want to know is, who's the gimp'"
- Hockney (Kevin Pollak) to McManus (Stephen Baldwin), Fenster (Benicio Del Toro), and Keaton (Gabriel Byrne) about Kint (Kevin Spacey)
"And that was how it started. The five of us being brought in on a trumped up charge, to be leaned on by half wits....What the cops never figured out, and what I know now, was that these men would never break, never lie down, never bend over for anybody. Anybody."
- Kint to Agent Kujan (Chazz Palminteri)
"That guy is tense. Tension is a killer. I used to be in a barber shop quartet in Skokie, Illinois. The baritone was this guy named Kip Tiskin, big fat guy...and I mean like Orca fat. He was so stressed in the morning...."
- Kint to Kujan
"I'm not a rat."
- Kint to Kujan
"But you say you saw Keaton die. I think you're covering his ass and he's still out there somewhere. I think he's behind that whole circus at the harbor. My bet is that he's using you because you're stupid and you think he's your friend."
- Kujan to Kint
"The greatest trick the devil ever pulled was convincing the world he didn't exist."
- Kint to Kujan
"It was Keyser Soze, Agent Kujan. I mean the devil himself. How do you shoot the devil in the back' What if you miss'"
- Kint to Kujan
"But why me' Why not Fenster or McManus or Hockney' Why me' I'm stupid. I'm a cripple. Why me'"--Kint to Kujan
"Because you're a cripple, Verbal. Because you're stupid, because you're weaker than them."
- Kujan to Kint

Director Bryan Singer's labyrinthine crime drama centers on five career criminals (played by Gabriel Byrne, Kevin Spacey, Benicio Del Toro, Kevin Pollak, and Stephen Baldwin) who meet after being rounded up for a standard police line-up. Upon their release, the men band together to pull off an intricate heist involving $3 million worth of emeralds. Their success brings them to the attention of the enigmatic Keyser Soze, an unseen, nefarious, and mythic underworld crime figure who coerces them into pulling off an important and highly dangerous job. The scenes that follow make THE USUAL SUSPECTS one of the most fascinating crime thrillers in cinema history.

Working from the Oscar-winning screenplay by Christopher McQuarrie, Singer adroitly tells the complex story through flashbacks, cross-cutting, and voice-over narration. Such nimble handling of the intricacies of the nonlinear narrative adds to the suspense, leaving viewers on the edge of their seats until the clever, satisfying finale. Singer's expertise in the technical aspects of filmmaking--his use of a dioptic filter to keep two close-up faces in focus, as well as his inventive use of six-frame step printing--helped him earn his reputation as a visually impressive and stylish director. Filled with excellent performances from veteran actors (Kevin Spacey won his first Academy Award for his breakthrough role as Verbal Kint), THE USUAL SUSPECTS placed Singer squarely on the cinematic map.

THE USUAL SUSPECTS is an intricately plotted and suspenseful tale about five very different crime suspects who meet while in a police line-up. After the quintet's fortuitous encounter, they decide to band together and attempt their own big heist by robbing a smuggler of $3 million worth of emeralds. However, the following job proves much more dangerous....