Star of Midnight combines the spunk and sparkle of Rogers and the urbane sophistication of Powell with gals, gangsters, Broadway and banter to shape a classic '30s whodunit. 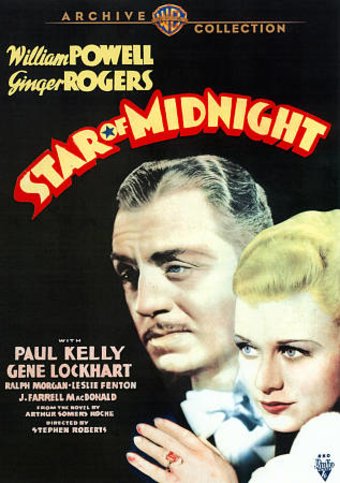 William Powell is a debonair lawyer suspected in the murder of a nosy newspaper columnist. Aided by classy, sassy, marriage-minded Ginger Rogers, he untangles the Manhattan maze of double-crosses, disguises and misdirections without disarranging his dinner jacket -- or bruising his gin. Martinis all around if you solve the mystery first!

This barely-disguised but effective riff on THE THIN MAN (1934) stars that film's lead, William Powell, opposite Ginger Rogers instead of Myrna Loy. Clay Dalzell (Powell) is a suave attorney fonder of solving crimes than trying cases. His elegant girlfriend, Donna (Rogers) hopes that Clay will settle down and marry her. A friend, Tim Winthrop (Leslie Fenton), approaches Clay with a mystery that the amateur sleuth can't resist. Tim's girlfriend Alice disappeared a year ago. During the performance of a Broadway play, Tim spots Alice onstage, but she disappears again. Clay takes the case and sets up a meeting with a gossip columnist who seems to have the answers, but the reporter is murdered and Clay is suspected of the crime. As Clay puts together the pieces, he comes up with several suspects, including the play's producer, a couple seeking to prove a friend's innocence in a capital crime, and the gangster Jim Kinland (Paul Kelly).

Death | Mystery | Romance | Thriller | Murder | Reporters | Detective | Crime | Gangsters | Journalists / Journalism | Romances | Love
This product is made-on-demand by the manufacturer using DVD-R recordable media. Almost all DVD players can play DVD-Rs (except for some older models made before 2000) - please consult your owner's manual for formats compatible with your player. These DVD-Rs may not play on all computers or DVD player/recorders. To address this, the manufacturer recommends viewing this product on a DVD player that does not have recording capability.