A decoding expert is assigned to office work instead of the combat role he longs to play. 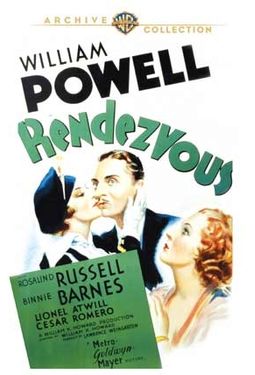 Intrigue, plot twists and romantic jealousy drive this riveting World War I espionage thriller starring William Powell as a decoding expert assigned to office work instead of the combat role he longed to play. But there is no shortage of action as he becomes involved with a socialite (Rosalind Russell) whose uncle, the Assistant Secretary of War (Samuel S. Hinds), sends him into a world of German spies, a Russian mistress (Binnie Barnes) and betrayal at almost every turn. As he helps to orchestrate and decipher some of the most secret maneuvers in the war, it is not long before his own life is in danger.

This espionage thriller with romantic comedy touches was loosely based on the book AMERICAN BLACK CHAMBER by the real-life head of the U.S. Secret Service during World War I, Herbert O. Yardley. Bill Gordon (William Powell) is a newspaper puzzle editor who becomes a lieutenant in 1917 when he enlists to fight in the First World War. Before shipping out, Bill meets and becomes attracted to Joel Carter (Rosalind Russell), the niece of John Carter (Samuel Hinds), the Assistant Secretary of War. When Joel learns about Bill's former occupation, she arranges for his transfer to the War Department, where he is put to work code breaking for Major Brennan (Lionel Atwill). When Brennan is murdered as the result of a German-Russian spy ring's machinations, Bill investigates the spies and a comely secret agent (Bonnie Barnes), which jeopardizes his newfound romance with Joel. Russell received the role because MGM's first choice, Myrna Loy, was refusing to work for the studio at the time.

Action | Adventure | Romance | Spies | Reporters | Military | Espionage | Spy | Germany | Trains | Newspapers | Romances | Russia | Love
This product is made-on-demand by the manufacturer using DVD-R recordable media. Almost all DVD players can play DVD-Rs (except for some older models made before 2000) - please consult your owner's manual for formats compatible with your player. These DVD-Rs may not play on all computers or DVD player/recorders. To address this, the manufacturer recommends viewing this product on a DVD player that does not have recording capability.