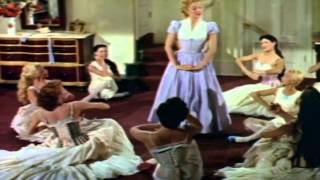 Rodgers and Hammerstein's musical about a love triangle in the midst of the Oklahoma land rush is adapted to the screen featuring the enduring songs "People Will Say We're in Love," "Oh, What a Beautiful Mornin," "Oklahoma!" and more. Shirley Jones' debut, this panoramic film was actually shot in Arizona! Academy Award Nominations: 4. Academy Awards: Best Sound Recording and Best Scoring of a Musical Picture.

A big, lush screen version of the Rodgers & Hammerstein hit Broadway musical. Originally presented in Todd-AO widescreen, this rousing tale of a farm girl who falls in love with a cowboy and then must fend off the advances of a villainous suitor is packed with some the most beloved tunes in American theater -- "Oh What a Beautiful Mornin'!," "The Surrey with the Fringe on Top," and, of course, the title song "Oklahoma."