Sci-Fi Creature Classics: 4-Movie Collection (20 Million Miles to Earth / Mothra / It Came From Beneath the Sea / The Giant Claw) 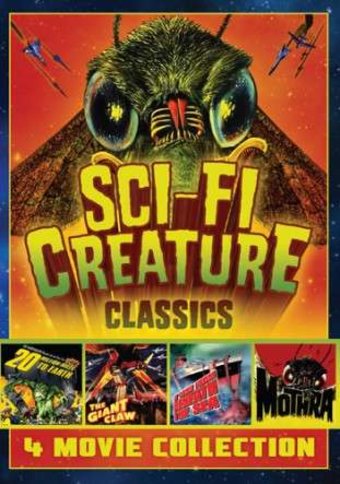 This four-pack of sci-fi monster movies includes 20 MILLION MILES TO EARTH, MOTHRA, IT CAME FROM BENEATH THE SEA, and THE GIANT CLAW.

20 MILLION MILES TO EARTH (1957) B&W/Not Rated:On its way home from Venus, a U.S. Army rocket ship crashes into the sea off of Sicily leaving Colonel Calder the sole survivor... or so it seems. A sealed container is also recovered from the wreck, and when a zoologist and his granddaughter open it, the gelatinous mass inside escapes. Overnight, it grows into a horrific monster that has doubled in size. In desperation, Calder calls in the Army to help fight the monster, which has taken refuge atop the Coliseum in Rome. But it will take more than man's weapons to fight the evil forces of the unknown and save the world from destruction.

THE GIANT CLAW (1957) B&W/Not Rated: Global chaos erupts when an enormous bird from outer space ventures to Earth and begins killing scores of innocent bystanders in this awe-inspiring sci-fi thriller starring stunning Mara Corday and Jeff Morrow. Four times faster than sound, the bird is bigger than a battleship and surrounded by an invisible radar-resistant shield which repels existing destructive devices. It s a race against time for scientists Mitch MacAfee and Sally Caldwell to devise a weapon against this abominable creature before it obliterates the World. Can they do it? IS there enough time? See for yourself in this terrifying adventure of man against monstrosity.

IT CAME FROM BENEATH THE SEA (1955) B&W/Not Rated: In Ray Harryhausen's vintage sci-fi thriller, a giant, radioactive octopus makes the deadly mistake of attacking Navy Captain Pete Mathews' submarine, prompting the bold commander to pursue the monstrous beast across the Pacific Ocean before it attacks anyone else. But as the military races to develop a special torpedo that will penetrate the mutated octopus's brain and destroy it, the eight-armed monstrosity suddenly discovers how to survive on land, wreaking havoc first on the Golden Gate Bridge and then in the Embarcadero, sending the terrified citizens of San Francisco running for their lives.

MOTHA (1961) Color/Not Rated: A science fiction classic! After an atomic blast, members of a Japanese expedition explore the heavily-radiated Infant Island. Much to their surprise, the scientists discover that life still exists there: two beautiful twin girls called Ailenas. Standing only six inches high, they are the guardians of Mothra, a sacred giant egg. Later, Nelson, one of the explorers whose avarice has gotten the best of him, returns to the island to kidnap the Ailenas with plans to exhibit them around the world. Nelson gets more then he s bargained for, however. The giant egg hatches into a larva which grows to tremendous size and wreaks havoc on downtown Tokyo. Soon the caterpillar metamorphoses into a gigantic moth which the entire Japanese armed forces can t stop. Will the Earth survive?

Customer Rating:
Based on 112 ratings.