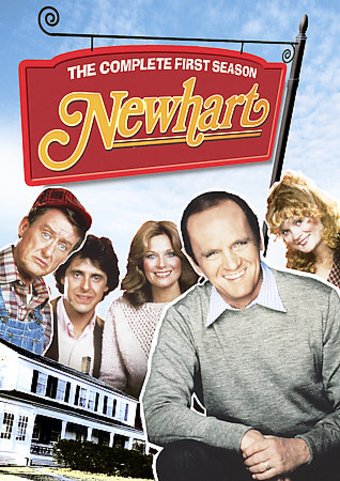 113 ratings
Out of Print: Future availability is unknown
Notify Me When Available
Add to Wishlist
Format:  DVD  (3 Discs)
item number:  QYG2
91% recommend us!

Disc 1: "In the Beginning," "Mrs. Newton's Body Lies A'Mould'ring in the Grave," "Hail to the Councilman," "Shall We Gather at the River'" "This Probably is Condemned," "No Tigers at the Circus," "The Perfect Match," "Some are Born Writers... Others Have Writers Thrust Upon Them"

Disc 2: "No Room at the Inn," "The Senator's Wife Was Indiscreet," "Sprained Dreams," "The Way We Thought We Were," "The Visitors," "What Is This Thing Called Lust'" "Breakfast Theater," "Ricky Nelson, Up Your Nose"

Disc 3: "A View from the Bench," "The Boy Who Cried Goat," "Heaven Knows Mr. Utley," "You're Homebody ‘til Somebody Loves You," "Grandma, What a Big Mouth You Have," "Enjoy Being a Guy"

Though it's most famous for its shocking and hilarious ending, NEWHART is a smart and funny sitcom from start to finish. After the success of THE BOB NEWHART SHOW in the 1970s, actor-comedian Bob Newhart moves his trademark dry wit to this series set in a New England inn. Writer Dick Loudon (Newhart) and his wife Joanna (Mary Frann) escape the chaos of New York City for a place that embodies peace and quiet: Vermont. But when the couple buys an inn, they realize that the country is home to just as many eccentric characters as the city. Among the locals are the maple-syrup-loving George Utley (Tom Poston) and the three strangest brothers this side of the Mississippi: Larry, Darryl, and Darryl. Season one of this classic series features guest appearances from Rue McClanahan, K Callan, Dana Elcar, Robert Pastorelli, Jerry Van Dyke, and Ruth Gordon.

Customer Rating:
Based on 113 ratings.

I loved this series Movie Lover: Lynn Flournoy from Luthersville, GA US -- September, 9, 2009


I am looking forward to the next season coming out.