A Hero Will Rise. 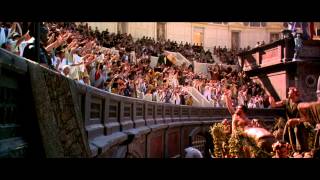 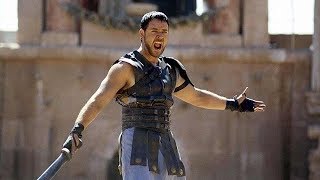 "At my signal, unleash hell."
- Maximus (Russell Crowe) to his troops
"Are you not entertained'!"
- Maximus to the arena crowd

Ridley Scott (BLADE RUNNER, ALIEN) transports Hollywood to second-century Rome in this rousing historical epic that proudly harkens back to such films as BEN-HUR and SPARTACUS. Russell Crowe plays Maximus, a Roman general who leads the troops in conquering Germania for the empire. When an aging Marcus Aurelius (Richard Harris) tells Maximus that he'd like him to rule Rome once he's gone, a classic confrontation ensues between the brave and charming soldier--who wants to return home to his wife, son, and farm--and the jealous and conniving Commodus (Joaquin Phoenix), the emperor's only son, who is thirsty for power. Bought as a slave by the profiteering Proximo (Oliver Reed, in his last role), Maximus must kill or be killed in the ring, battling to save not only himself but the future of the very empire that he loves and honors. The film features a terrific battle sequence (that recalls the beginning of SAVING PRIVATE RYAN), huge crowd scenes of thousands of people, and even a little romance, albeit mostly taboo. The impeccably choreographed gladiator scenes are violent yet thrilling, flashing by like lightning. GLADIATOR is a glorious spectacle filled with heart and soul.

An epic adventure that calls to mind the big-budget Hollywood films of the past, Ridley Scott's thrilling film is a raucous, engaging, and highly impressive spectacle. Maximus, a well-respected general, is stripped of his rank when the scheming Commodus takes over the Roman Empire in 180 AD. Maximus finds himself fighting for his life in the vicious gladiator arenas, where he uses his fame to spark unrest among the oppressed Roman citizens, firing up Commodus's anger and setting the stage for the ultimate battle.