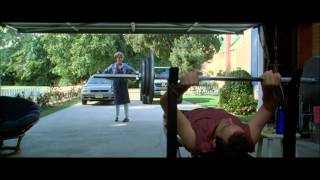 AMERICAN BEAUTY tells the story of Lester Burnham (Kevin Spacey), a suburban father who snaps when he becomes disgusted with his stale, repetitive existence. Burnham lets us know in voice-over from the film's opening that this is the day he dies (using the SUNSET BOULEVARD flashback approach), a technique that adds an inevitable tension to the proceedings and keeps the story moving forward at all times. On a whim, Lester quits his job and begins a regression into young adulthood, lifting weights, smoking pot, doing nothing, and discovering the overflowing sexuality of his 16-year-old daughter's best friend, Angela (Mena Suvari). His wife, Carolyn (Annette Bening), has her own midlife crisis of sorts. A real estate agent, she experiences a youthful awakening when super-agent Buddy Kane (Peter Gallagher) seduces her repeatedly. Meanwhile, Jane (Thora Birch), the Burnhams' daughter, is pursued by Ricky (Wes Bentley), the mysterious boy next door who carries a video camera around with him at all times. When Ricky's militaristic father, Colonel Fitts (Chris Cooper), discovers something potentially horrifying on one of his tapes, and when Carolyn's rage for Lester's actions boils over, the time bomb finally explodes.

Lester Burnham (Kevin Spacey) is a gainfully employed suburban husband and father. Fed up with his boring, stagnant existence, he quits his job and decides to reinvent himself as a pot-smoking, responsibility-shirking teenager. What follows is at once cynical, hysterical, and, eventually, tragically uplifting. A flawless cast (Spacey, Bening, Birch, Suvari, Bentley, and especially Cooper) combines to deliver one of the decade's strongest ensemble performances in this multiple-Oscar-winning film. Director Sam Mendes, already a wunderkind in the world of British theater, proves that his talent isn't limited to the stage in his feature-length debut.

Requiem for a Dream
$12.80 Super Savings
Add to Cart

Midnight in the Garden of Good and Evil (DVD)
$5.80 Super Savings
Add to Cart