When two adventurous, twin teenagers recombine the halves of a mysterious ring, they are instantly transported to ancient Egypt... as masters of an all-powerful genie named Shazzan. 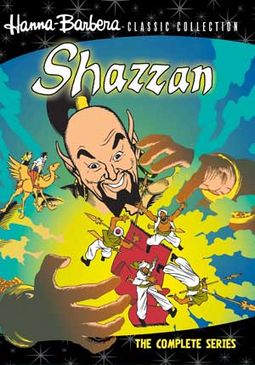 When two adventurous, twin teenagers, Chuck and Nancy, recombine the halves of a mysterious ring, they are instantly transported to ancient Egypt... as masters of an all-powerful genie named Shazzan.

Now, with the help of the mighty Shazzan, the twins seek the wizard who lives "behind the beyond," the only person able to help them return home. But even as the teenagers pursue their quest, every evil sorcerer in the desert kingdom desires the twins' magic ring and will stop at nothing to gain the power it grants over Shazzan.

This wild and crazy release from the classic Hanna-Barbera animated series SHAZZAN includes all 36 episodes of the show, following the mystical adventures of a genie, who makes wishes come true for two teenagers named Chuck and Nancy, who fly around the desert on a magical camel.