Rolling Stone: 4 stars out of 5 -- "It's a refreshing, cohesive package....The title track is a bouncy, almost wickedly catchy highlight, while the luxurious 'R.E.M.' is a soulful, sexy romp..." 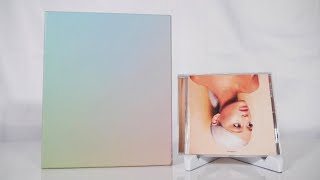 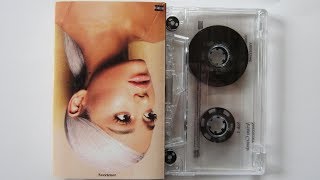 Rolling Stone
4 stars out of 5 -- "It's a refreshing, cohesive package....The title track is a bouncy, almost wickedly catchy highlight, while the luxurious 'R.E.M.' is a soulful, sexy romp..."
Spin
"15 songs that, together, form an indomitable wall of love, lust, and wistfulness perpetually frozen in the intoxicating, fun period of a new relationship."
Entertainment Weekly
"Ariana Grande was looking for a new challenge. She found it in SWEETENER, her most complex project to date."
NME (Magazine)
4 stars out of 5 -- "[A] stunning, sometimes left-field body of work....Dreamy, defiant and driven by hope."

Audio Mixer: Serban Ghenea.
Photographer: Dave Meyers.
Ariana Grande never explicitly mentions the bombing at her Manchester Arena concert on Sweetener, the first album she's recorded since that May 2017 tragedy, yet its presence is evident throughout the record. It's there on the opening song, an interpolation of the old Four Seasons song "An Angel Cried," its title suggesting sadness. It's there in the hopeful closer "Get Well Soon," whose gospel turns of phrase play like a benediction. It's there in the percolating "The Light Is Coming," which dismisses darkness. Most of all, it's there in the maturity and focus Grande displays on Sweetener, an album that broadens and deepens the R&B inclinations of 2016's Dangerous Woman. Grande may still find some space for silliness -- witness "Pete Davidson," a minute-long ode to her fianc‚ which winds up with her repeating "happy" as if it were a mantra -- but Sweetener never seems frivolous. The love songs carry weight, there's gravity in the effervescent re-creations of disco; the sparkling EDM surfaces of "Good Night N Go" coalesce into a sweet romanticism, and the big club beats seem elastic, not rigid. Similarly, Grande never pushes these songs too hard. Instead of favoring vocal pyrotechnics, she demonstrates restraint, which isn't merely an indication of stylistic maturation but how her songs resonate without such tricks. Such concentration doesn't simply result in a stronger set of songs, but an album that coheres in a way other Ariana Grande albums don't, which means Sweetener is something of a double triumph: she's come through a tough time stronger and better than before. ~ Stephen Thomas Erlewine

Ariana Grande
My Everything [Deluxe Ed.]
$19
Add to Cart