The stars of Carmen Jones headline a sensitive story of a first-year schoolteacher who finds promise in a student labeled a backwards child. 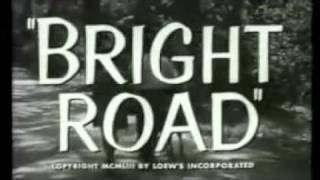 A year before they shot to stardom in Carmen Jones, Dorothy Dandridge and Harry Belafonte made this inspiring film about a gifted educator and a lost boy. Dandridge plays Jane Richards, a fourth-grade teacher concerned about young C.T. (Philip Hepburn), a student whose indifference to school has even the principal (screen-debuting Belafonte) calling him a backwards child. Troubles as typical as a schoolyard brawl and as tragic as a classmate's death drive C.T. further into his shell. But Jane perseveres, hoping to help her student develop -- the same way a caterpillar, in a cocoon C.T. guards, turns into a butterfly.

One of the few mainstream films of its era to have a largely African-American cast.

BRIGHT ROAD was a real rarity in 1953: a major-studio production with an all-black cast. Based on an award-winning short story by Mary Elizabeth Vroman, the film is largely set at a rural black school in an unspecified Southern community. Idealistic new fourth-grade teacher Jane Richards (Dorothy Dandridge) makes it her mission in life to "reach" troublesome failing student C. T. Young (Philip Hepburn). Just when Jane and the boy are making progress, tragedy strikes, plunging C. T. into the depths of depression and defeatism. But with the help of the school's compassionate principal (Harry Belafonte), Jane is able to get C. T. back on the right track--and as a bonus, the boy becomes an unexpected hero in a moment of crisis. Handled in a leisurely, understated fashion, BRIGHT ROAD represents perhaps the best directorial effort of Gerald Mayer, MGM's resident "keeper of the 'B's" in the 1950s. Best scene: C. T.'s euphoric reaction upon earning a passing grade for the first time in his life.

Teachers | Love
This product is made-on-demand by the manufacturer using DVD-R recordable media. Almost all DVD players can play DVD-Rs (except for some older models made before 2000) - please consult your owner's manual for formats compatible with your player. These DVD-Rs may not play on all computers or DVD player/recorders. To address this, the manufacturer recommends viewing this product on a DVD player that does not have recording capability.