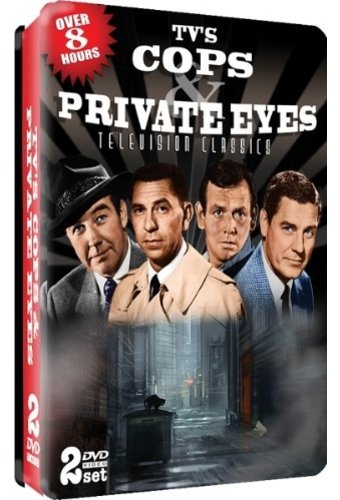 In the Golden Age of Television, almost every night offered one of the early staples of television entertainment, shows featuring cops and private detectives. Portrayed as diligent and aggressive they were also suave and worldly as they faced off against a variety of criminals, domestic and international.

This collection of those groundbreaking shows brings you a wide range od styles and mood from the jazz detective Peter Gunn to the gritty drama of Highway Patrol; from the streets of LA to a world of intrigue behind the Iron Curtain. Stirred together with a tantalizing hint of sex and violence, these tales of good combating evil have a timeless appeal.

Highway Patrol (1955-1959) One of the most popular syndicated cop shows, Highway Patrol featured Broderick Crawford as the archetypical Chief of Patrol, Dan Matthews.

Man Behind the Badge (1953-1955) Narrated by Charles Bickford, an anthology of re-enactments of actual cases from law enforcement agencies.

Boston Blackie (1951-1953) A dapper, reformed crook living in Los Angeles, Boston Blackie (Kent Taylor) solved crimes ahead of the police in his own unique style.

Man with a Camera (1958-1960) Photographer Mike Kovak (Charles Bronson) roams the world on dangerous assignments, often helping to solve crimes along the way.