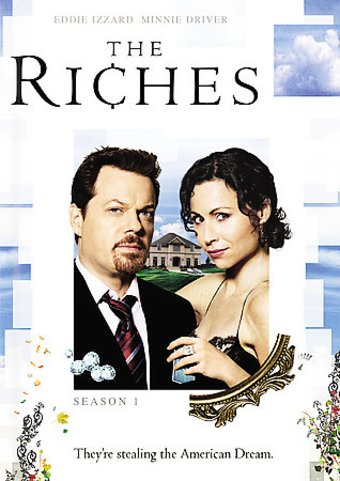 Disc 2: "Been There, Done That!," "The Big Floss," "Reckless Gardening," "Virgin Territory"

Minnie Driver and Eddie Izzard star in this well-received FX series based on the concept of what happens when a family of traveling con-artists finds its way into a wealthy suburban community, fooling everyone around them into thinking they belong while trying to convince themselves of the same thing. Driver plays Dahlia Malloy, a wife and mother who at the start of the series has just been released from prison for a crime her husband, conman Wayne (Izzard) committed. Understandably bitter, Dahlia self-medicates and steals to protect her children, ending up on the run from a scary crew of extended family. When a crazy coincidence gives Wayne and Dahlia the keys to a new life and a new identity, they seize it, mistakenly figuring life in the suburbs will be a piece of cake. Like a mixture of DESPERATE HOUSEWIVES, WEEDS, and Coen-brothers comedy, THE RICHES has the potential for wide appeal. This set contains all 13 episodes from the show's premiere season, including the pilot.