You can lock your car. But if he wants it...it's GONE IN 60 SECONDS

204K ratings
Currently Out of Stock: We'll get more as soon as possible
Notify Me When Available
Add to Wishlist
Format:  Blu-ray
item number:  XMLCR 63266BR
Also released as:
Gone in 60 Seconds for $19
Gone In 60 Seconds for $7.60
Our customers love us! 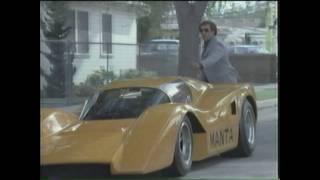 The basis for the 2000 film starring Nicolas Cage and Angelina Jolie, 1974's GONE IN 60 SECONDS is a revered cult classic, mostly because of the delirious 40 minute car chase that concludes the film. Directed by its star, writer, producer, and stunt driver H.B. Halicki, GONE IN 60 SECONDS was a drive-in phenomenon when it was originally released. In it, Maindrian Pace and a group of his colleagues race to steal 48 specific makes and models of cars in a week, which will net them $250,000 if they succeed. However, the group runs into trouble trying to jack a 1973 Mach 1 Mustang, and Pace ends up being chased through seven counties by throngs of police in what is probably the most exciting and ambitious car chase ever filmed.