Their love affair was the talk of our town! 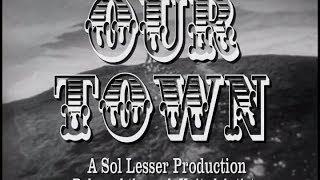 Noted essayist Thornton Wilder's Pulitzer Prize-winning play OUR TOWN is widely regarded as one of the highlights of American theater. Wilder was consulted throughout preproduction, and the result is a depiction so true that viewers might feel for a short while as if they are residents of the small town depicted, which was the precise intent of Wilder.

Frank Craven, who played the stage manager in the Broadway version, sparkles as the talkative town pharmacist who narrates the action, stitching together a folksy, nostalgic, bittersweet tapestry of humor, love, and life.

OUR TOWN covers the lives and events of two families in a woodsy New Hampshire village from the year 1900 through 1913. William Holden and Martha Scott, both reprising their roles from the Broadway production, meet as teenagers and succumb to adolescent affections before maturing, marrying, and bearing a child of their own. Throughout, the film hammers home its message about the preciousness of time in people's short lives.

Life in a small New England town is portrayed with emphasis on human drama and conflict in this splendid adaptation of the hit play.