Masterpiece in every sense of the word 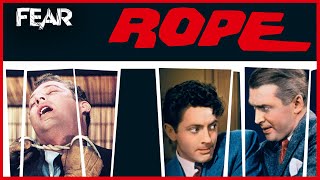 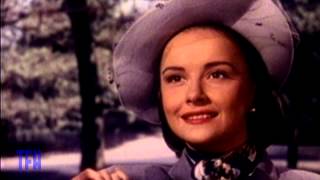 James Stewart, Farley Granger and John Dall star in this macabre spellbinder, which was inspired by a real-life case of murder. Two thrill-seeking friends (Granger and Dall) strangle a classmate and then hold a party for their victim's family and friends, serving refreshments on a buffet table fashioned from a trunk containing the lifeless body. When dinner conversation revolves around talk of the "perfect murder," their former teacher (Stewart) becomes increasingly suspicious that his students have turned his intellectual theories into brutal reality.

Based on the famous Leopold and Loeb murder case (from which two other films, COMPULSION and SWOON, were also derived), ROPE both challenges and terrifies the audience. Alfred Hitchcock disdained the whodunit crime story, which he felt lacked emotional force, and ROPE shows the director's preference for letting the audience know more than the characters onscreen. The film opens as two young men (Farley Granger and John Dall) strangle a friend just to prove they're intellectually capable of committing the perfect crime. To add to the amusement, they hide the body in a trunk that will serve as the dinner table for a party honoring the deceased. The film hones in on an hour and a half of the party, with the constantly moving camera capturing the changing emotional atmosphere as the guests grow increasingly concerned about the fate of the missing boy. ROPE is a directorial tour de force, blending complex camera movement with intricate staging to present the entire story in near-real time in one location. Notably, the adaptation of the play by Patrick Hamilton was written by perennial Hitchcock actor Hume Cronyn.

ROPE is a masterfully directed Alfred Hitchcock production about two college students who murder a classmate in a bizarre experiment. This was Hitchcock's first film as an independent producer. The film is based on the famous Leopold and Loeb murder case.