CeDell Davis The Horror of It All 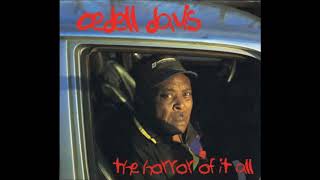 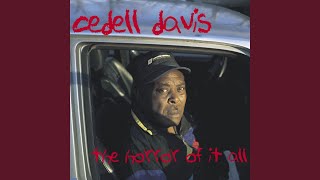 Personnel: CeDell Davis (vocals, guitar); Kenny Brown (guitar); Dale Beavers (bass); Sam Carr, Calvin Jackson (drums).
Personnel: Kenny Brown (guitar); Calvin Jackson , Sam Carr (drums).
Audio Mixer: Bruce Watson .
Photographer: Matthew Johnson.
A hardcore blues artist like Davis could only find a home on a label like Fat Possum, champions of all that is pure and unadulterated in Mississippi blues. The apparently wheelchair-bound Davis accompanies himself on guitar with a quirkiness that immediately sets him apart from the crowd. His appealingly sloppy electric guitar work sticks out of each tune like a broken bottle with a million jagged edges, and it's virtually impossible to get through THE HORROR OF IT ALL without bleeding a little bit. Davis performs solo on most of the album, though R.L. Burnside's guitarist Kenny Brown and a few other pop up. Davis' ominous themes and creepy demeanor can be downright unnerving, as on "Chicken Hawk" and the John Lee Hookerish title track. But he's also got a screwy sense of humor that lightens things up when necessary, as evidenced by the riotous history lesson of the closing "Tojo Told Hitler."

80%off
Sonny Terry / Brownie McGhee
Conversation with the River
$3.98 on Sale
Add to Cart