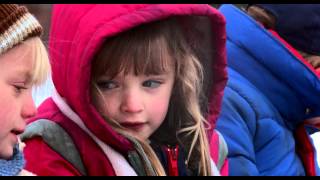 In this heartwarming Christmas film, a young mother, Ginny Grainger (Mary Steenburgen), rediscovers the joy and beauty of Christmas thanks to the unshakeable faith of her six-year-old daughter (Elisabeth Harnois) and Gideon (Harry Dean Stanton), her very own guardian angel. With Gideon's help, Ginny learns that the season is about her family and other people she loves, rather than the presents and materialism heaped on by a consumerist society.

One Magic Christmas
Award-winning actress Mary Steenburgen (TV's JOAN OF ARCADIA, HOPE SPRINGS) gives a solid performance as Ginny Grainger, a young mother who rediscovers the joy and beauty of Christmas, thanks to the unshakable faith of her six-year-old daughter Abbie (Elizabeth Harnois) and Gideon (Harry Dean Stanton), Ginny's very own guardian angel. Ginny's wondrous experience will touch your heart and warm your soul in the timeless tradition of past Disney favorites. ONE MAGIC CHRISTMAS fulfills all your most treasured Christmas fantasies. Share it with those you love.

Christmas is coming, and for the Grainger clan, it's looking pretty bleak: Mr. Grainger has lost his job, debts are piling up, and the family is about to lose their home. As a result, the mother falls into a terrible bout of depression, so a guardian angel arrives to help her and the family through this cheerless period. Will the cherub be able to provide a Merry Christmas for all'

86%off
Celebration: Music For The Holidays Year-Round
99¢ CD Sale
Add to Cart