The greatest adventure of escape!

171K ratings
Currently Out of Stock: We'll get more as soon as possible
Notify Me When Available
Add to Wishlist
Format:  DVD
item number:  QFR7
Also released as:
Papillon (Blu-ray) for $17.90
Our customers love us! 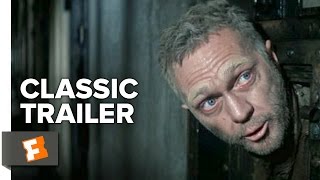 They called him Papillon, meaning "butterfly." If only he had wings to go with the name. Unable to fly, Henri Charriere virtually willed himself free. He persisted until he did the impossible: escape Devil's Island. Based on Charriere's bestseller and shot in Spain and Jamaica, Franklin J. Schaffner's film of Papillon united two stars at key career junctures. After a decade of fine work in The Great Escape, The Sand Pebbles and Bullitt, Steve McQueen found in Charriere another ideal tough-guy role. Coming off The Graduate, Midnight Cowboy and Little Big Man, Dustin Hoffman again distinguished himself as Dega, Charriere's scruffy friend.

One man sentenced to life in the French prison system refuses to give up trying to escape even when transferred to the prison colony on Devil's Island. Despite years of degradation and horror, the undying spirit of "Papillon" never dies. Academy Award Nominations: Best Original Dramatic Score.

Papillon, a prisoner relegated to the squalid confines of a notorious South American penitentiary, maintains he's innocent of the crime for which he's doing time: murder. His cell-mate, Dega, however, is a counterfeiter whose guilt is unquestionable. Though he's a civilized business-type, Dega is easily vitiated by the depraved mores of prison life.
As the interned continue to be treated shamefully and subjected to several cruel and unusual punishments, Papillon grows weary of the mistreatment. Misery leads him to attempt a breakout despite the consequences of possible failure. After several unsuccessful endeavors, Papillon finally manages to break out, but not before he's been through hell and back.

Miracle of Our Lady of Fatima (DVD)
$18.10 Super Savings
Add to Cart